Nowhere else in Flanders will you find such a concentration of religious places as in the Antwerp Kempen. The legacy of friars and beguines does not only consist of magnificent buildings and superb landscapes, they also like to spoil you with a variety of regional delicacies: crispy bread, strong cheese and heavenly beers.

The Tourist Office of the province of Antwerp did not want these traditions of monks and nuns go to waste and mapped a bike route along cycling network through the towns of Malle, Brecht and Zoersel. This great 48-kilometre cycling route starts at one of the best-known religious houses of the Antwerp Kempen, i.e. the Westmalle Trappist abbey.

The abbey was founded in 1794 by Cistercian monks. Initially, the clerics focused on exploiting the rugged heathland of the Kempen region. They later took up various other activities, such as brewing the national drink: beer. Their now world-famous Trappist beers Westmalle Dubbel and Tripel, brewed within the abbey walls, are the leitmotiv of this cycling route. 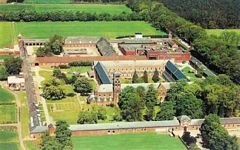